Batteries don’t all deteriorate in the same way. Higher usage doesn’t seem to be statistically significant, unlike continuous use of a battery at maximum or minimum end, which can negatively affect it. In this situation, using a state-of-charge buffer can lower degradation rates as it prevents batteries from becoming completely depleted or fully charged (although this means the effective accessible range for the driver is further reduced).

All this is necessary for consumers to know to make an informed decision. But mainstream EVs haven’t been around long enough to provide enough reliable information about battery life. The technology may not be new, but its wide use certainly is, which means that it will take a few more years to ensure enough reliable information about battery life. Research released in 2019 by Geotab Inc., analyzed data from 6,300 EVs (various makes and models) and found that in real-world use, an average capacity loss was 2.3% per year. In short, the batteries were exhibiting “high levels of sustained health.” Although more recent research seems to be pointing towards a more serious deterioration, that can be influenced by various factors such as speed of charging. 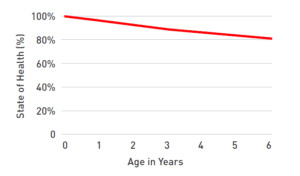 Batteries of native electric vehicles allow for greater range flexibility due to their larger size. However, their size doesn’t solve the problem of their lifespan. Granted, the problem might not be perceived as significant, but for an end-user it’s an important piece of data.

The deterioration noted above might be modest but for an average driver who wants 300 miles per charge, 75 miles lost over 10 years can be a significant loss. What’s more, batteries decline non-linearly and the model above is an average degradation over time that doesn’t show the initial drop. A typical degradation curve looks less linear and resembles the letter S. 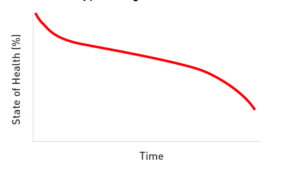 It’s worth noting, however, that most battery warranties allow a claim if the SOH falls below 70% of the new value, creating a safety net for consumers. Interestingly, automakers are developing secondary markets for ex-vehicle batteries, notably in the grid storage market where the energy density per volume (or mass) of the battery is less important than it is in a vehicle.

Most high-tech goods tend to get cheaper as they are manufactured at increasing volumes. This is also true for batteries but only up to a point. The industry is growing, but its sudden and dramatic early growth means that matching earlier savings will be difficult, and the law of diminishing returns has set in as shown by the flattening curves.

Looking at the industry trends, it’s easy to notice that when it comes to the price per kWh of power, price reduction curves are going to flatten. It’s not a question of whether the battery costs are going to stop declining, it’s a question of when. The reductions are no longer as dramatic as they were 10 years ago and, each year, they get smaller by such small increments as to be almost insignificant.

Another problem affecting this curve is the technology itself. According to The Times, “A major technological breakthrough will be required to make electric cars much, much cheaper.” Normally, improvements in technology contribute to a lower price. But this takes time, and improvements to the batteries to make them more cost effective have not been dramatic enough to affect the price curve.

Interestingly, there has been a recent trend to revive one of the older battery types—the LFP (lithium-iron phosphate)—in vehicles that are very cost sensitive. These batteries display lower energy density but have the advantage of a good life cycle and not being badly affected by higher temperatures (which makes a huge difference in geographical locations such as India). These batteries are also seen as more socially acceptable as they contain fewer “conflict minerals.”

Batteries are hard to improve upon quickly. What’s more, it will take time for innovations in battery technology to make it into viable products and then into vehicles. Therefore, it’s important to keep redesigning the engines to make them more efficient, and to extend the battery life in smaller increments, while working on the major breakthroughs.

We use cookies on our website to give you the most relevant experience by remembering your preferences and repeat visits. By clicking “Accept All”, you consent to the use of ALL the cookies. However, you may visit "Cookie Settings" to provide a controlled consent.
Cookie SettingsAccept All
Manage consent

This website uses cookies to improve your experience while you navigate through the website. Out of these, the cookies that are categorized as necessary are stored on your browser as they are essential for the working of basic functionalities of the website. We also use third-party cookies that help us analyze and understand how you use this website. These cookies will be stored in your browser only with your consent. You also have the option to opt-out of these cookies. But opting out of some of these cookies may affect your browsing experience.
Necessary Always Enabled
Necessary cookies are absolutely essential for the website to function properly. These cookies ensure basic functionalities and security features of the website, anonymously.
Functional
Functional cookies help to perform certain functionalities like sharing the content of the website on social media platforms, collect feedbacks, and other third-party features.
Performance
Performance cookies are used to understand and analyze the key performance indexes of the website which helps in delivering a better user experience for the visitors.
Analytics
Analytical cookies are used to understand how visitors interact with the website. These cookies help provide information on metrics the number of visitors, bounce rate, traffic source, etc.
Advertisement
Advertisement cookies are used to provide visitors with relevant ads and marketing campaigns. These cookies track visitors across websites and collect information to provide customized ads.
Others
Other uncategorized cookies are those that are being analyzed and have not been classified into a category as yet.
SAVE & ACCEPT